The McClay Foundation is involved in a number of local and international initiatives to advance health and wellbeing.

The following project is working to promote positive mental health and well-being through sport in Craigavon, Northern Ireland. 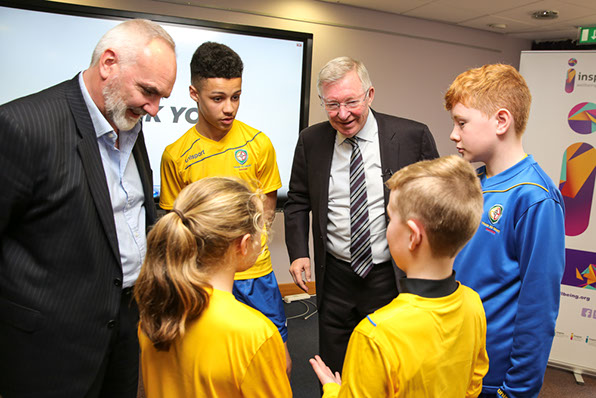 Background
TRAIN 2 B SMART (TTBS) works to promote positive mental health and well-being through sport in Craigavon, Northern Ireland, an area in which many vulnerable young people live in economic and social deprivation.

Founder Pat McGibbon is a former professional footballer who played with Manchester United, Wigan Athletic and Northern Ireland from 1992 – 2002. Sadly, during that time his brother Phillip took his own life, after which Pat returned home to Northern Ireland.

Pat’s passion for improving the physical, mental and emotional wellbeing of children and young adults stems from his passion for sport, his family, and the loss of his brother Phillip.

Train 2 B Smart
TTBS aims to improve health and wellbeing in the local community through engagement in sport.

Uniquely, founder Pat and his team of volunteers utilise their contacts to arrange keynote speakers from the international sporting world to inspire the local community and educate them on the power of sport / exercise as a medium to promote resilience and well-being.

Currently, TTBS have around 200 boys and girls playing soccer at various age groups, with a volunteer base of 30+ coaches and committee members.

Foundation support
Ensuring TTBS have the support necessary to grow and open their doors to everyone is vital. With the help of The McClay Foundation,  TTBS has employed a full-time project coordinator with the following objectives:
Benefits
The support received from the McClay foundation will ensure Train 2 B Smart continues to improve health and well-being in the local community through engagement in sport.